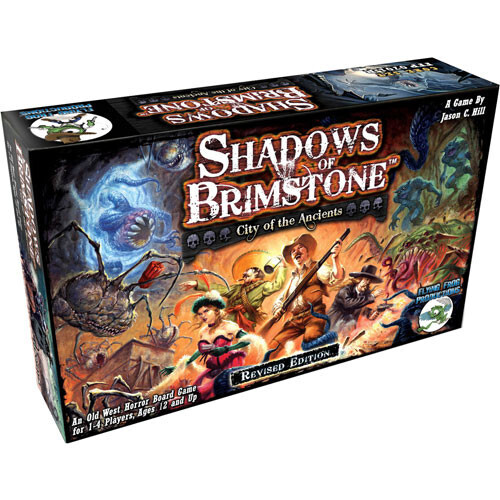 It is the mid-1880s in the Southwest United States. The small mining town of Brimstone has struck it rich when they discovered large deposits of a new precious mineral called Dark Stone up in the hills. It has magical properties, is rarer than gold, and is incredibly dangerous! In a flash, the town of Brimstone is consumed, the epicenter of a cataclysmic supernatural explosion, ripping open portals to other worlds down in the mines, and unleashing a great Darkness to spread across the land! Now hordes of demons pour form the mines to ravage the countryside, and the sky grows black with swarms of nightmarish creatures. A few brave souls step forward and form a posse of Heroes to hold back the Darkness!

City of the Ancients is a fast-paced, fully cooperative, dungeon-crawl board game set in the Old West, with a heavy dose of unspeakable horror! Players create characters, taking on the role of a classic Western Hero Archetype, such as the Law Man, Gunslinger, or Saloon Girl. Forming an adventuring posse, the Heroes venture down into the dark mines, overrun with all manner of ancient demons and foul creatures from another world. With tactical gameplay, lots of dice, and a robust card-driven exploration system, no two games are ever the same as the heroes explore the mines finding new enemies to fight, new loot to collect, and new dangers to overcome. Players can even find portals to other worlds, stepping through to continue their adventures on the other side!

Hero characters can be kept from game to game in a campaign system, earning experience and going up in levels to increase their skills and gain new abilities. The Heroes can also visit local Frontier Towns between adventures, spending their hard-earned loot and re-supplying for the next mission. So load up yer' six shooter, throw on yer' hat and poncho, and gather the posse, the darkness is coming, and all hell's about to break loose.

This Revised Edition Core Set features all new plastic miniatures that are easy to assemble, with fantastic detail. With updated Rulebooks and cards; fully compatible with all existing expansions. This game includes a full set of interlocking, double-sided Map Tiles, featuring the Old West Mines on one side and the ancient, frozen-over alien city of the Targa Plateau on the other. As the Heroes step through a gateway to another world, they find themselves in a long-dead City of the Ancients!